The model ESX10-TB-101-DC24V-16A extends our product group of
electronic overcurrent protection devices for DC 24 V applications. At a width of only 12.5 mm it provides selective protection for all
DC 24 V load circuits. This is achieved by a combination of active electronic current limitation in the event of a short circuit and overload disconnection typically from 1.15 times rated current. The ESX10-T is track-mountable and provides ease of installation for groups of devices with several circuits. DC 24 V switch-mode power supplies are widely used in automation today. In the event of an overload, however, they turn down the output voltage which is intended to power all connected loads. So if there is a failure in a single load of the system, the supply voltage will break down also in all other load circuits. Not only does this frequently cause undefined fault conditions, but it can even lead to machine stoppages or system downtimes. This is exactly where the ESX10-T comes in by responding to the overload conditions faster than the switch-mode power supply. The max. possible overcurrent is limited to typically 1.15 times 16 A (see table 1). This allows switching on capacitive loads of up to 20,000 μF, but a disconnection will only be effected in the event of an overload or short circuit. Visual status indication is by means of a multicoloured LED and by a single alarm. The manual ON/OFF switch on the device
itself allows start-up of certain individual load circuits. As soon as the ESX10-T detects overload or short circuit in its load circuit, it blocks the load output transistor and disconnects the current flow in the faulty circuit. After remedy of the failure, the load output
of the ESX10-T is re-activated by actuating the ON/OFF switch on the device.
US patent number: US 6,490,141 B2
US patent number: US 8,237,311 B2 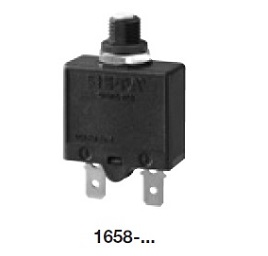 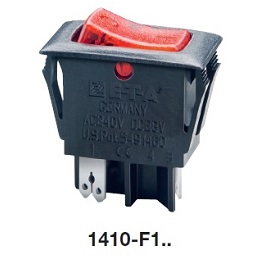